A few months ago, it became clear that Ajax’ third kit for 2022/2023 would be a collaboration with the Amsterdam-based fashion brand Daily Paper. Now, the shirt is finally launched!

The main color of the shirt is ‘Savanne’, which looks a bit like gold. The kit features a red-black-red stripe in the center front, which refers to the city colors of Amsterdam. Besides that, you see some subtle images of nine famous football courts in te city. You can see the following courts printed on the kit: Balboaplein, Zaandammerplein, A. Nouriplein (voorheen Nigel de Jongplein), Louis De Visserplein (Gregory van der Wielplein), Piramide, Hendrick de Keijserplein, Joubertplein, Mijehof en Obi/Boni Plein

The Adidas, Ajax and Ziggo logo are white. Under the Ajax logo, you also see the Daily Paper logo in white. This logo will only show on the retail version of the kit and not on the one Ajax will wear in the Champions League, because UEFA-rules don’t allow that.

The shirt will be combined with a black short, that also has the logos in white. Besides that, the socks will be in the same color as the shirt: savanne. 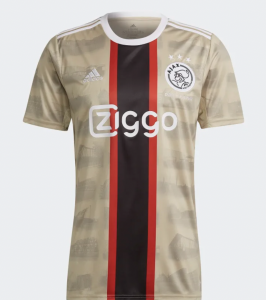