Donny van de Beek will play with the number 34, old squadnumber of his friend Abdelhak Nouri, at his new club Manchester United. The midfielder already thought about it himself, before the club told him about their idea: “They asked me before I could ask them. They knew about my history with Appie.” Dean Henderson, goalkeeper, used to have 34 at his back, but told the club he wouldn’t mind giving it to Van de Beek.

Van de Beek and Nouri have been friends for years, and 34 became part of Donny’s life: “Appie wanted 34 when he joined the first team, as he wanted to be part of the 34th title. I couldn’t leave the club before winning that title. It was beautiful as well as emotional. We did it all for him.” 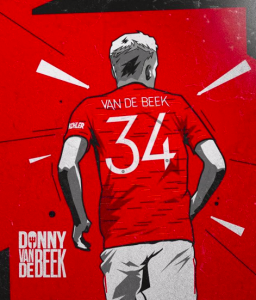 About the author: Kevin Ligtvoet